One Miles per hour

My good friend Charlotte is in town from Norway and what better time to visit Santa Barbara than when it’s a scorching 96 degrees. So we hit the beach. It’s been miles and my hangout/hideaway for the past couple weeks.

I found myself spending too much money just walking around downtown either shopping or eating so the beach is far away enough and just as entertaining for both of us 🙂 after lunch at my favorite beachside grill we had coffee at cafe Luna in summerland then laid on the beach for a bit more as the crowds of people rolled in, all obviously escaping their hot houses since SB doesn’t believe in AC. I fell in love with a green tea smoothie today, that or I was just miserably hot and low on energy. Miles was the worlds cutest and best baby today, I mean he always is but today was exceptional. Also must be the heat 😉

We had a pacifier crisis when I lost his pacifier (forgot it at home) and after he nursed he naturally wanted to take his nap which means pacifier in mouth, favorite blanket and left alone. Well….. The pacifier was no where to be found as were at the burger joint so I unscrew an Avent bottle and used the lid (almost worked). He realized and started crying. I nursed him totally to sleep as I stared at my food getting cold and laid him in his stroller (success). Then as we got into the car later to head back to town he wanted his pacifier since that’s his “car thing” and that’s where I had no other option. I dug around my car and found a dirty old soothie pacifier meant for newborn ages and he rejected it the whole way to a nearby baby boutique and as I ran in to buy a pacifier he passed out with the soothie and my friend Andrea holding his hand.

$13 later and an organic expensive intense pacifier things were good. Oh ya and I got suckered into buying some teething toy for another $10. (I love it though and I’ll post about it later)

Regardless of this incident the day was amazing and filled with sun, friends, green tea smoothies and expensive pacifiers. 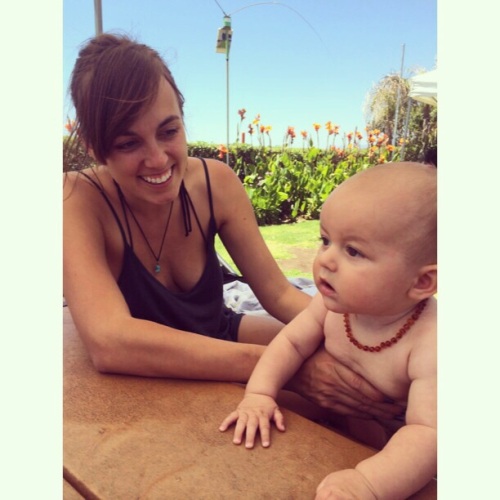